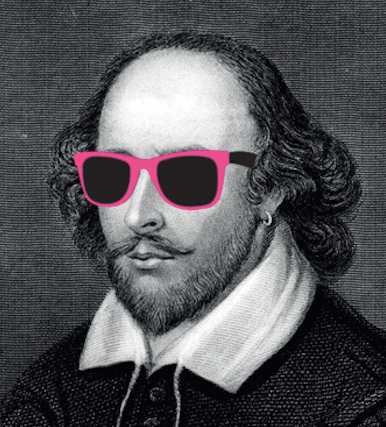 Well, I couldn't claim to be from Will Shakespeare's hometown without paying tribute to the father of modern English himself! The English language owes a great debt to Shakespeare. He invented over 1700 of our common words by changing nouns into verbs, changing verbs into adjectives, connecting words never before used together, adding prefixes and suffixes, and creating totally original words. Therefore, the title of this article's rather misleading because we actually use a lot of his words in everyday English:

Yep. Shakespeare invented all of these. And if that wasn't enough, the Bard of Avon was familiar with seven foreign languages and often quoted them directly in his plays. His vocabulary was the largest of any writer, at over twenty-four thousand words. Just to put that into perspective, the average native speaker typically uses about 5,000 words in speech and 10,000 in writing.

So how can one aspire to that? Well, I guess one way to widen your vocabulary is to step out of your comfort zone and try to express yourself in different ways without using the same old familiar words. A place to start is with curse words. Shakespeare was a master of these. He coined and used some absolutely excellent insults throughout his work.

To help you make your insults more colourful, here are some of Shakespeare's finest. If you want to direct the insult at someone, use "Thou art a" (you are a) and then a word from each column. If it's just for a general outburst of exasperation, then the 3 words suffice. I don't know what half these words mean but said in an angry voice they do the trick....and any combination works!

For ready-made insults, try this page. Feel free to post your curses in the comments section.